Lexington County Administration Building is open to the Public Monday - Friday from 8:00 a.m. to 5 p.m.

None at This Time

The Lexington County Airport located in Pelion (6J0 or Six-Juliet-Zero) is owned and operated by the County of Lexington and is designated as a publicly maintained General Aviation (GA) airport by the National Plan of Integrated Airport Systems (NPIAS).  The airport, which was formerly known as Pelion Corporate Airport, was purchased from the Town of Pelion in December 2004.  It supports a variety of General Aviation (GA) and sport aeronautical operations and is home to 12 based aircraft. Located just north of the Town of Pelion, the airport consists of approximately 189.27 acres of land and features a single runway which is designated as Runway 18-36.  The runway is 4,335 feet long by 60 feet wide and currently supports small single and twin-engine piston aircraft (less than 12,500 pounds) and is equipped with a parallel taxiway (Taxiway A), a 100 Low Lead (100LL) self-service fueling facility, aircraft tie-downs, 10 T-hangars, 2 corporate hangars, and a terminal building.  According to the FAA’s 2010 Terminal Area Forecasts (TAF), annual operations totaled 6,300 in 2010. An operation is defined as a take-off or a landing.

Recently completed projects at the airport include:

Key goals that were identified in the ALP Update/Business Plan include economic development, airport self sufficiency, design requirements, and user demand.  Some of the short-term economic development opportunities as identified in the current Capital Improvement Plan include T-hangar construction, potential runway extension and widening.  The intent of these capital improvement projects is to provide needed hangar space and to support larger more demanding aircraft.  These improvements will help support nearby industrial parks and will be an asset for economic development within the county.  By 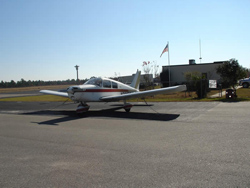 implementing these short-term goals, the Lexington County Airport at Pelion will be able to accommodate existing and ultimate demands for additional based aircraft storage, small corporate users, and aviation businesses in general.

Long-Term goals for the Lexington County Airport at Pelion include encouragement of future development and accommodating a wider range of aircraft types, including turboprop aircraft and small jet aircraft.  The ability to accommodate turboprop and jet aircraft could lead to the installation of a Jet-A fuel farm.  The installation of a Jet-A fuel farm would increase demand and use of the airport facilities.  This in turn would boost the economic market in the Pelion area and southern portion of Lexington County. These long-term goals will ultimately be determined by demand and operations.  Peak activity forecasts show that operations should increase to 7,750 annual operations by 2015 and to 14,400 annual operations by 2030.

Since its acquisition in 2004, the County of Lexington has successfully been able to maintain and upgrade the Lexington County Airport at Pelion’s facilities through a number of capital improvement projects.  The County of Lexington intends to continue these capital improvement projects over the next several years in an effort to position itself to become a small corporate airport and maintain its current status as a general aviation airport.  The airport is a significant economic catalyst for South Carolina and to surrounding areas and it provides essential aviation services to meet community demand.

Architectural Rendering of the Airport(PDF)