Lexington County Administration Building is open to the Public Monday - Friday from 8:00 a.m. to 5 p.m.

Lexington County Firefighter Zachary Pfentner wasn’t planning on running into any burning buildings on his day off, but one Lexington family is thankful that he did.

On the morning of Dec. 28, 2022, Pfentner said he was driving down Boiling Springs Road heading toward Pond Branch Road. It was just before 7:30 a.m. when he noticed black smoke coming from a home just up the hill.  Pfentner quickly dialed 9-1-1 as he approached the home. He could 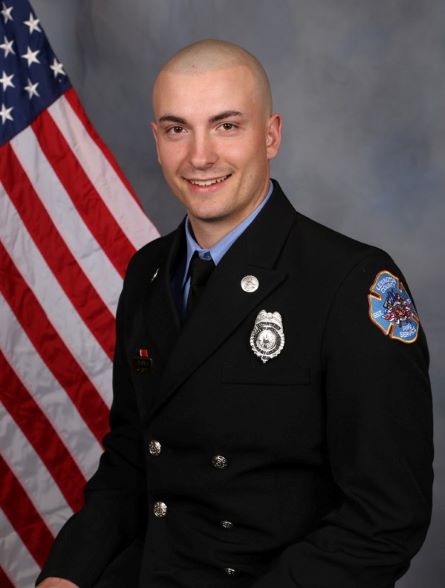 see black and gray smoke coming from all sides of the home. Pfentner stayed on the phone with the 9-1-1 call taker as he parked in front of the neighboring house and walked toward the burning building.

“As I approached the house’s front porch, a young woman ran out holding a small child and she laid the child on the porch. I yelled to her if there was anyone else in the house,” Pfentner said. “The young woman said there were still people inside so I told the call taker I was trying to get people out of the house.”

At this point, the young woman, a child, and an older woman had all escaped from the home. But the family told Pfentner that a man was still inside and that he would need help to get out because he couldn’t walk. As Pfentner went into the home, he said he started yelling for the man, but the smoke conditions were getting worse.

As Pfentner was searching the burning home for the man, he said he could hear some noises coming from the second floor. Pfentner managed to find the staircase.

“I heard more thumping and could see the man trying to slide down the stairs. He ended up about halfway down the steps and I went over to him to try to help him up and I told him we needed to get out,” Pfentner said. “I put the man’s arm around my shoulder and tried to get him to stand up with me. He was conscious but seemed out of it. He was not able to stand and couldn’t move.”

The conditions kept getting worse. Pfentner said he could see black smoke billowing down the staircase toward them and he knew they needed to get out of the house now. Pfentner then began dragging the man by his arms toward the door. The young woman, who had come back into the house, helped Pfentner drag the man out of the house and onto the front porch. A few minutes later, Lexington County Fire Service units arrived on scene.

The man who was rescued was taken to the hospital to be treated for smoke inhalation, but thankfully no one was seriously injured.

“Each day our members come to work ready to respond to a citizen in need. It’s not often that a member who is on the way home finds themselves first on scene of an emergency,” Lexington County Fire Chief Mark Davis said. “Engineer Pfentner was off duty when he noticed a column of smoke along his route home. His instincts knew this column of smoke wasn’t from a chimney, but from a building on fire. He called 9-1-1 as he approached the residents to report the fire and then his training took over, whereby he assisted in the removal of the homeowner from the residence.”

“Through his training and dedication to our citizens, he was able to save a life, even before the first fire apparatus arrived on scene,” Chief Davis said. “I am extremely proud of his efforts that day and all the members of the Lexington County Fire Service.”